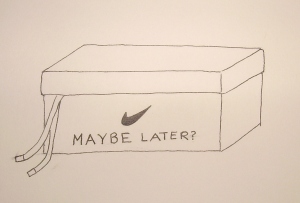 I buy books I don’t read, salad I don’t eat and recipe books I don’t use. I buy them with good intentions and yet they ultimately don’t make me more well-read, healthier or more adventurous with cooking. ‘Tsundoku’ is a Japanese word which means allowing books to pile up unread. The fact there is a word for this reassures me this is a symptom of the human condition rather than a flaw unique to me.

Buying something related to a self-improvement goal can give the illusion that you’ve actually done something useful towards attaining that goal. We get a dopamine hit from the purchase and feel oh so smug. Of course, if you want to start running and don’t have any trainers, you should go out and buy those. Do you really also need a smart piece of wearable tech and five sweatbands though? It feels good to buy new things but we don’t want to reward ourselves before we’ve done anything. Otherwise we risk putting off meaningful action because we congratulate ourselves for spending money virtuously. It would be much better to put off the purchase for a week and make it conditional on taking a step toward your goal (e.g. go for a run).

I have fallen into this trap many times although I’m better at recognising it now. I bought myself more expensive coffee during university finals with the rationale that I would be working much harder and therefore deserved the better-tasting caffeine fix. In fact, I  drank it more often while watching iPlayer and YouTube. I wish I had known about the ‘Pomodoro’ time-keeping method back then (blog post on this coming soon).

When I started the couch-to-5k running programme it was remarkable how many sports clothes I had purchased before making it to the 5k mark (curse you Fabletics and your VIP membership). I only actually made it to 5k once I had signed up for a half-marathon and needed to train to avoid the embarrassment of dropping out.

You can rarely buy progress. It pays much more to be aware of your motivations for your virtuous purchasing and think about the actions you can already take towards your goal that don’t require money.

One thought on “Can’t buy progress”